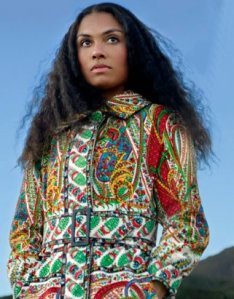 Amel Larrieux (1973-) is an American R&B and soul singer, songwriter, and producer. She was one half of the 1990s R&B group Groove Theory, best known for their hit single “Tell Me” from their self-titled debut album. She is one of the most beautiful and talented women in the world.

Amel, whose name means “hope” in Arabic, was born in Greenwich Village in New York City. Her mother, a dance professor and critic, is of black American descent, and her father is white American of French, English, and Scottish descent. Growing up as an only child in the Westbeth Arists Community in Greenwich Village, Amel was surrounded by artistic influences from all over the world, ranging from hip-hop to Middle Eastern, and everything in between. Her mother brought her along to the shows she would critic, and early on, Amel made the decision to become a musical artist.

Amel met producer and musician Bryce Wilson in 1991, and they formed Groove Theory, which released its debut album of the same name in the mid ’90s. Their first single “Tell Me” peaked at number five on the Billboard Hot 100, making Groove Theory an instant success. Amel, however, left the group in 1999 to pursue a solo career.

As a solo artist on Epic Records, Amel released the album, Infinite Possibilities, which produced her greatest single hit to date, “Get Up”. After

the album, Amel left Epic Records and began her independent label BlissLife Records with her husband, Laru Larrieux. On her indie label, she released the albums Bravebird and Morning, the latter being her highest-charting solo album. Bravebird features the single “Giving Something Up” which was featured in the commercial for BET’s Rap It Up AIDS awareness campaign. In May of 2007, Amel released a jazz album entitled Lovely Standards. The album reached the top five of the Top Jazz albums for that year.

Amel has contributed music to many film soundtracks including Barbershop, Love Jones, Sunset Park, and Down To Earth. She was part of Coca-Cola’s “Keep It Real” campaign, appearing on radio, television, and print ads. She has also been featured in the magazines Harper’s Bazaar, Essence, Honey, and TRACE. She appeared in the anniversary print campaign for Coach, Inc.

Amel lives in New York City with her husband and daughters Sky and Sanji Rei. She is working with Bryce Wilson on what will be Groove Theory’s second official album.