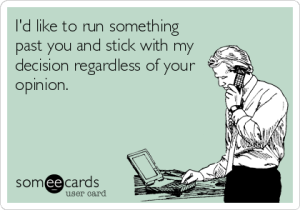 Dating a jerk? How to know?

It may seem obvious when a guy you’re dating might be a jerk — a rude, selfish boor lacking in even the most basic of manners. However, some jerks are much more subtle, and only reveal their true selves when alone with you or in certain contexts.  It can be difficult to tell if you’re dealing with someone who is angry, honest, or just a garden variety jerk.

That said, the jerk has a few tell-tales signs which are evident in much of his behavior. Over the years of dealing with a variety of jerks, I’ve found that these signs are common to all, and are dead giveaways that you are dealing with a jerky guy:

1. He is always right

Jerks, who usually have an unrealistically positive view of themselves, tend to think they are always right as a result. Or at least mostly right. And always when it counts.

I know, I know — no one is always right. The jerk was never let in on this secret, it seems. Or he disagreed with the person who said it, and since he is always right, well, we’re back to where we started.

Relationships are about learning and growing but the jerk doesn’t realize that this is a gradual process and a two-way street. He will give “kind” hints that something is not to his liking, and mention it often until it the situation is altered to suit his desires. His criticism is general, extending to people, places, and things alike, and never-ending.

PSA to all women: Any man who is rude to others, regardless of how he treats you, is a jerk. There is no use in denying it or protecting him, because his true jerkish tendencies will be directed toward you, sooner or later. If not, his jerk behavior will make your relationships with others a constant battle.

4.  He ignores your opinion

Ever get the feeling that you’re talking to the air? Are conversations a contest to see who can best the other’s statements? Does your guy ask for your opinion and then do whatever he wants anyway?

You may be dealing with a jerk.

Confidence is a great trait to have. Don’t confuse a confident guy with a jerk: a confident man is assured of his abilities and does not need to control others. The jerk, on the other hand, is less confident and builds a false sense of security on overtly or covertly bending others to his will. Beware.