Natasha Khan (1979-), better known by her stage name Bat for Lashes, is an English songstress and multi- instrumentalist of Pakistani and English descent. Her music is a magical blend combining fantasy, historical fiction, and spirituality.

Growing up in a suburban area outside of London, Natasha took frequent trips to her father’s home country of Pakistan. Her diverse background introduced her to a wide range of cultural influences. Her father inspired her love of the otherworldly. She says of him, “When I was growing up, my Dad used to use storytelling all the time… it was very archetypal, full of symbolism and the metaphors that go through the generations with fairytales”.

When her parents divorced she turned to music. She learned to play the piano, adding the bass guitar, auto-harp, and harpsichord to her instrumental set. She cites Björk, Steve Reich and Kate Bush as her main inspirations.

As a university student, she studied music and visual arts. There she assembled multi-media work focused on performance, sound installations, and animations. But she didn’t go on to work in music or visuals, instead she initially worked as a nursery school teacher. During her time as a teacher, she began to work on what would become her first album Fur and Gold. 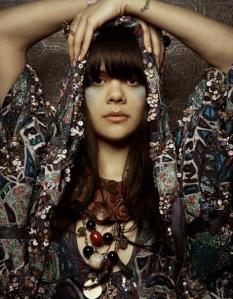 Fur and Gold was released in 2006 with the single “The Wizard”, and reissued in 2007. The album was nominated for the 2007 Mercury Prize, a music prize awarded for the best album from the United Kingdom.

Her second album, Two Suns, is a metaphorical journey of her quest to find her “knight in shining armor” and “meeting a lot of strange characters along the way”. The album was released in 2009 with its first single “Daniel” becoming a major hit in the UK.

She rereleased Two Suns in the fall of 2009 with a cover version of Kings of Leon’s “Use Somebody”. The cover was a great success with critics and non-critics alike, with some claiming it better than the original version.

She contributed “Sleep Alone” in 2010 to the Enough Project, a campaign against genocide.

Natasha spends her time traveling all over the world, and in between lives by the sea in England. 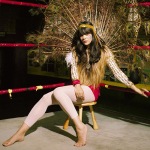 Bat for Lashes is like my twin sister: I relate to her otherworldly, mystical personal style more than any other current artist.

Daniel, when I first saw you
I knew that you had a flame in your heart
And under under our blue skies
Marble movie skies
I found a home in your eyes
We’ll never be apart

When I run in the dark, Daniel
To a place that’s worst
Under a sheet of rain in my heart
Daniel
I dream of home

When I run in the dark, Daniel
To a place that’s worst?
Under a sheet of rain in my heart
Daniel
I dream of home

When I run in the dark, Daniel
To a place that’s worst
Under a sheet of rain in my heart
Daniel
I dream of home