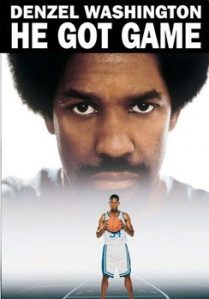 Alee’s Analysis: The life and times of the black American male is explored in a whirlwind of decades-old stereotypes.

He Got Game is a 1998 movie directed and written by Spike Lee. The plot of the film involves a New York prison inmate Jake Shuttlesworth (Denzel Washington) serving time for the manslaughter of his wife. Jake is offered a deal by the governor that would considerably shorten his remaining prison time. The only thing he has to do is convince his son, Jesus (Ray Allen), a superstar high school basketball player and number one prospect in the country, to sign a letter of intent to attend the governor’s alma mater. Just one problem — his son hates him; he has never forgiven his father for the death of his mother.

He Got Game features an all-star –and future all-star– cast. The previously mentioned Denzel Washington and Ray Allen (who knew he acted?) appear, plus Rosario Dawson, Hill Harper, Milla Jovovich, Rick Fox, and Lonette McKee, amongst others. But the most outstanding feature of this film is not the cast, but its amazing two-hour display of social and racial stereotypes. If you ever wondered just what stereotypes exist in and around black American communities about black men, this movie is for you.

Every romantic relationship in the movie includes a black male with a much lighter, if not white, woman. From Jake and his wife Martha (Lonette McKee), to a pimp and his main prostitute Dakota (Milla Jovovich), and even, later on, Jake and Dakota. Scenes featuring women almost exclusively include lighter-skinned women, unless she is not meant to be a sexual object (e.g. Jake’s daughter Mary [Zelda Harris]). Because everyone knows black American men love light-skinned women!

The women of He Got Game exist as extensions of the men. Women serve as outlets for the men, as sexual partners and means to take out their frustration in verbal and physical abuse. Nearly every scene involves some abuse of women. The only power women seem to have is between their legs. But even their one strength has its limits, as we see with the often abused and hopeless Dakota. 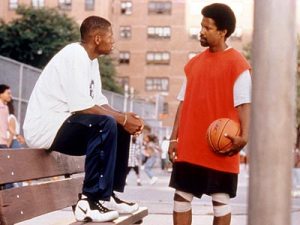 Jesus (not named after the Biblic lord, if you were wondering) is offered athletic scholarships from schools and more money than he has time for from NBA sports agents if he agrees to play for them. Everyone around Jesus is seeing green and preparing for the riches that will come by way of their lord and savior. Everyone except Jesus — despite suffering to raise his sister alone after his mother’s death and father’s imprisonment, Jesus is focused on education and doesn’t care about the money.

We almost think Jesus may be living up to his heavenly name, but he has one weakness: sex and girls. His trips to recruiting schools find him enthralled by the girls who flock around their possible star athlete. White girls, that is. As Chick Deagan (Rick Fox) is so kind to inform us, “The sistas make you work too hard for it”… the white [girls] let you drive their Mercedes and you can call them up [for sex] at 4 AM and they’ll be there before you hang up.

…Wait, basketball, cars, and easy white women? How could a black man resist? Jesus thinks he’s made it back to heaven and indulges in the “life” before he has to return to the world (his hometown of Coney Island, Brooklyn). If you are uncomfortable with lots of sex scenes in a movie, you’ll want to skip He Got Game.

It All Makes Sense…Or Not

Denzel’s superb acting (and Ray Allen’s not so superb acting) is almost overshadowed by everything else. Some scenes simply do not add to the story in any significant way and others are added on in a clumsy manner. In the end you wonder, “Did that make sense?” Well, at the very least He Got Game offers a glimpse into the life of the stereotypical urban black American male, up close and personal.