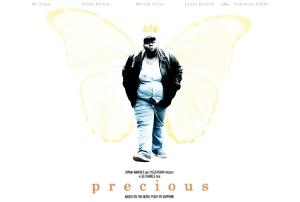 Alee’s Analysis: A semi-realistic, unpolished depiction of life at the bottom of America.

Precious is a 2009 critically acclaimed film directed by Lee Daniels and based on the novel Push by Sapphire. Gabourey Sidibe debuts as Precious, an illiterate, obese black teenage girl who dreams of leaving her abusive New York ghetto.

Precious is lauded by some as a bold and honest illustration of several overlooked issues among an overlooked group of people. Others criticize the film as an extreme and degrading portrayal of the life and mentality of low-income black America.

Precious is set in the projects of Harlem, New York in 1987. Claireece Precious Jones, also known as Precious, is a sixteen year old pregnant with her second child. The father of both her children is her own father, who has molested her for years. Precious endures daily verbal and physical abuse from her mother Mary (Mo’Nique).

Precious escapes her abusive surroundings by daydreaming — that she is in another place, another time, anywhere where she is appreciated and loved. She finally finds real life hope when she is transferred to an alternative high school. But not before we get to journey with Precious and explore just how cruel her world is.

No Place to Lay

Instead of protecting her daughter from molestation, Precious’ unwed mother Mary accuses Precious of “stealing her man” and resents her for it. She uses any opportunity to belittle her intelligence and appearance. Her only interest is her welfare checks; she has no interest in seeing Precious grow in any way, in fact she actively works against it.

The outside world is no kinder to Precious. Her classmates tease and bully her for her weight. Precious is literally alone. 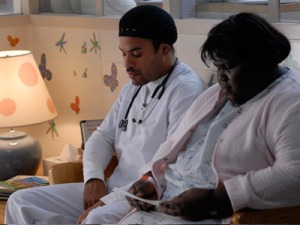 After years of being made to feel worthless, Precious begins to dislike herself. In contrast to her deep brown skin, she imagines herself with a “light-skinned boyfriend with real nice hair”. When she looks in the mirror she sees a blonde white girl. She is embarrassed that she is unable to read.

After being suspended from her high school for being pregnant Precious attends an alternative school. There she meets a few of the people who guide her along her path to true happiness and fulfillment.

One of these people is her teacher Miss Rain (Paula Patton). Miss Rain is Precious’ fairy godmother, helping her to learn to read and giving her a place to live when Precious escapes her mother’s home.

Also helpful are Nurse John (Lenny Kravitz) and Miss Weiss (Mariah Carey), a social worker who finally allows Precious to open up about her abusive home environment. With their support Precious takes her life into her own hands and makes herself a brighter future.

Precious is not a lukewarm film. It will make an impression on you, whether you think it is unrealistic or accurate, and whether your impression is negative or positive.

33 thoughts on “Precious: The Movie”