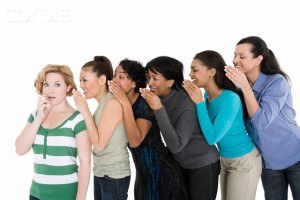 Gossip — one of the most popular and enduring pastimes, an activity that spans cultures and generations. Most of us have engaged in it at one point or another. Although most people would deny the title “gossiper” and when consciously aware of it, try to stay away from gossip, many of us regularly participate in discussing rumors about others.

Even though many willing take part in gossiping, most people have been the victims of negative gossip. What makes gossip so irresistible? Those who study social dynamics and psychology claim that gossip helps to create a sense of community and bonds between people, warns against danger, and teaches lessons about morality. However, they acknowledge that gossip can be a double-edged sword — undermining the benefits it is thought to created.

Superficially, gossiping about others can serve to bring people together through the sharing of information and common knowledge. As with any discussion, people may find points of similarity in their views and interests and forms bonds as a result.

On a deeper level, however, gossiping creates mistrust between people. If someone will gossip about one person, what makes others safe from having rumors spread about them as well? In addition, the person being gossiped about feels anything but included or part of the community.

Negative rumors make clear what behavior and situations will not be tolerated among a group of people. Those whose actions cause them to be the topic of gossip learn quickly what is acceptable or expected of them.

A greater lesson that may be learned is that of secrecy. While some may change their ways to more fit the community they are a part of, others may not change but simply keep their thoughts and actions to themselves. This further undermines the community and bonds that gossiping is supposed to create, as people feel they must keep their lives to themselves or suffer the consequences.

In my view, the most obvious impact of rumors and gossiping is insecurity. Both on the part of those gossiping and those being gossiped about. The cons far outweigh the pros, so I don’t take part in it, when possible.